We’ve written before about smoothing ABS prints using acetone vapor. This works very well, blending the printing layers together for a smoother finish and increased strength. Acetone is not particularly toxic and easy to obtain (in the Netherlands, any chemist stocks it).

For PLA, however, acetone smoothing does not work. This is a pity, since PLA is much easier to work with than ABS. We found some solutions for smoothing PLA, but most involve rather dangerous-sounding chemicals such as Tetrahydrofuran and Dichloromethane. The one exception we found is Ethyl Acetate which seems to give good results and is (relatively) safe. This was something we wanted to try for ourselves.

Fortunately, we were able to find a web shop that sells ethyl acetate in small quantities. It is not cheap, compared to acetone, but on the other hand you don’t need a lot when you use it for vapor-smoothing.

This was the first time we worked with ethyl acetate and we had no idea of its properties. The various safety data sheets and instructions to be found on the web state that it can irritate skin and eyes and that it is highly flammable but that the toxicity is low. Gloves and safety glasses seemed in order. The smell of ethyl acetate is quite strong and reminiscent of glue (I guess this is what chemists mean by ‘good warning properties’). We set out to try it in the most well-ventilated place we could find: outside. 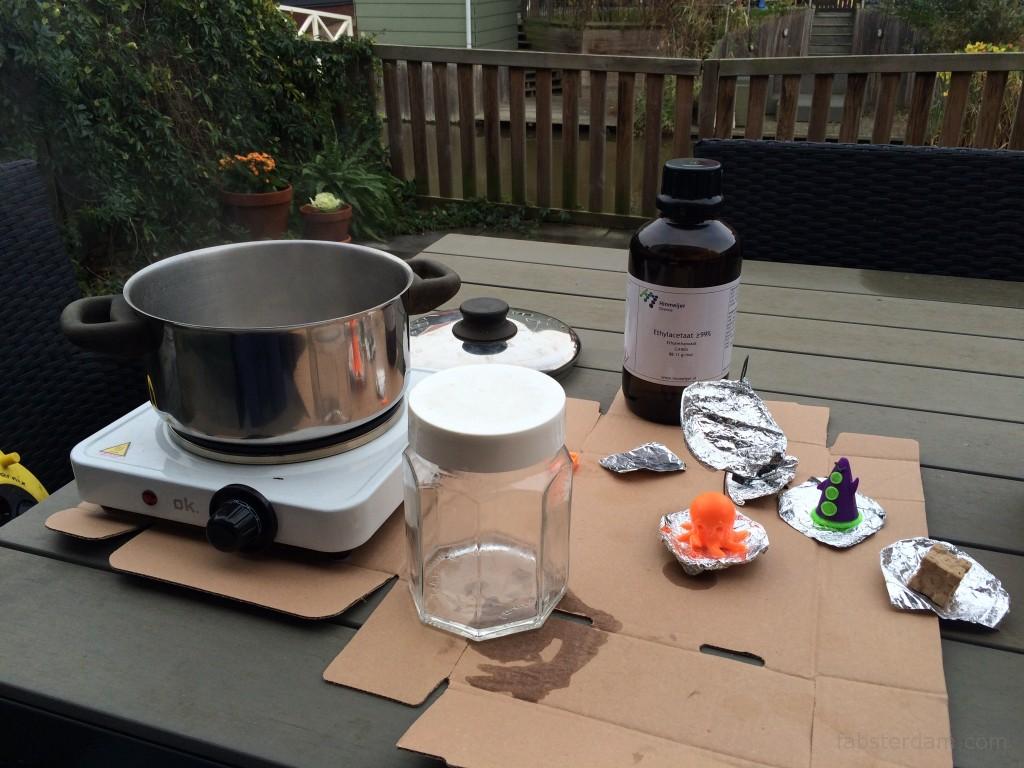 The procedure we used is exactly the same as the one we used for the acetone vapor smoothing of ABS: heat water in a pan; pour some (a few mms) of solvent in a glass jar, place jar in hot water; when the solvent starts to boil, put the metal frame containing the plastic part into the jar; leave it there until the plastic parts starts to ‘shine’, then remove part from the jar and let it dry. The boiling temperature of ethyl acetate is about 77ºC, so making vapor using the hot water method is easy.

We started the experiments with the object we always use for testing: a 2×2 ‘Lego’ brick.

Within seconds of putting it into the jar, the brick started to shine and we could take it out. The result is quite similar to the ABS/Acetone smoothing experiments we did earlier.

Our next victim was the classic cute octopus, printed in fluorescent orange PLA.

This was already a pretty nice print at a layer height of 0.1mm, but the layer lines are visible and can be felt.

Smoothing worked quite well! There are some layer lines left at the top but at the bottom everything looks and feels really smooth. We’ve seen this before with ABS/Acetone as well, it is caused by there being more vapor at the bottom than at the top of the print. This can probably be solved by letting the ethyl acetate boil a bit longer (creating more vapor) before putting the piece in.

Then it was time for a different material: LayWood. We were curious to see if the results would be similar to those with Colorfabb Woodfill. 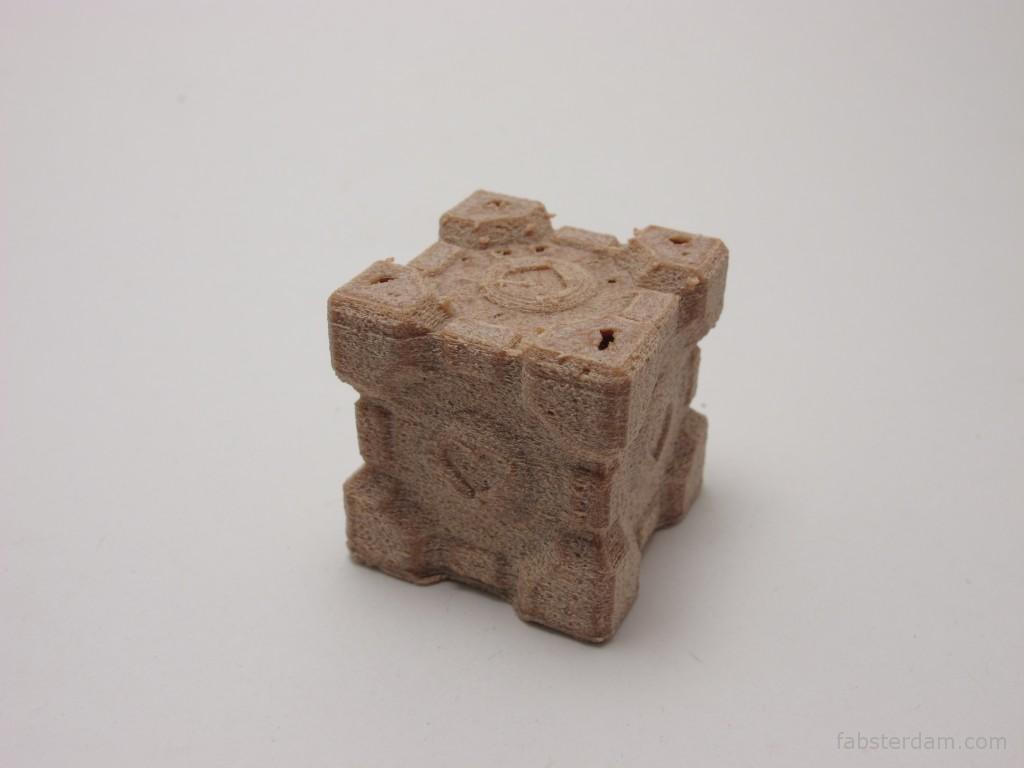 As PrintedSolid reported, ethyl acetate bleaches the color out of the Woodfill. For LayWood, this was no different… (the holes in the top have nothing to do with the smoothing, they were there before: this is a sacrificial object).

As a last experiment, we wanted to see what would happen if we left a print in the ethyl acetate vapor for a longer time. For ABS/Acetone, this causes the object to melt and lose more and more detail, trading smoothness for detail.

This is one of our older prints, we have since started making these with ABS and there the acetone smoothing produces a very nice, slick result. We wanted to see if we could get that same effect with PLA.

For PLA/Ethyl acetate, things worked out a little differently. At first, it looked like the part was smoothing out nicely, but then it started to flow too much (purple mess at the bottom) and there was some strange bleaching (white lines near the top).

All in all, we were quite happy with the results of our first experiments. As with ABS/Acetone, the best way appears to be to make a lot of vapor in the jar first, then put in the object for a short time (seconds), rather than leaving the object in the jar and try to make more vapor while it is in there.