High-Impact PolyStyrene (HIPS) is one of the less known 3d-printing materials. Most people that have heard of it know it as a dissolvable support material used in combination with ABS, because it dissolves in d-limonene (and ABS does not). It is not frequently used as a printing material in itself.

The guys from Form Futura want to change that because they believe that HIPS could be a very nice primary printing material. They are bringing out a line of HIPS filaments in 1.75mm and 2.85 mm diameters, at the moment only in white but black, red and gray are planned. They asked us to test a spool of their 2.85mm white HIPS and see how it compares to ABS and PLA. We wanted to look at a number of characteristics: extruder temperature, print bed, warping, quality and ‘smoothability’ (i.e., can HIPS be vapor-smoothed like ABS with Acetone).

HIPS requires a fairly high extruder temperature. We tried 210ºC, 225ºC and 235ºC. At 210ºC, extrusion was uneven and clotty, typical signs of too low a temperature. At 225ºC extrusion was better but inter-layer adhesion was poor: one of our test prints broke in two during printing. Both of these problems disappeared at 235ºC: the filament extruded smoothly and the layers held together strongly. Bridging worked very well at this temperature as well.

While the relatively high minimum extruder temperature may be a problem for some hot-ends, it is still in the safe range for most (e.g., our Budaschnozzle can be used up to 240ºC). An advantage of the higher melting temperature of HIPS vs. PLA could be that the printed part can be used close to a heat source, for instance as extruder parts.

HIPS sticks perfectly to BuildTak sheets at a heated bed temperature of 110ºC. This is the setup we use for ABS so we expected it to work for HIPS as well. But we were happy to discover that HIPS also sticks very well to bare Kapton tape at a bed temperature of 90ºC (unlike ABS, which we’ve only gotten to stick reliably on BuidTak or ABS-juice). Furthermore, after cooling down to room temperature, the prints pop off very easily, almost by themselves. The possibility to print on untreated Kapton tape is definitely a plus of HIPS over ABS.

One of the problems we (and many with us)  have seen with ABS is thermal cracks: the layers contract while cooling too quickly and break apart. 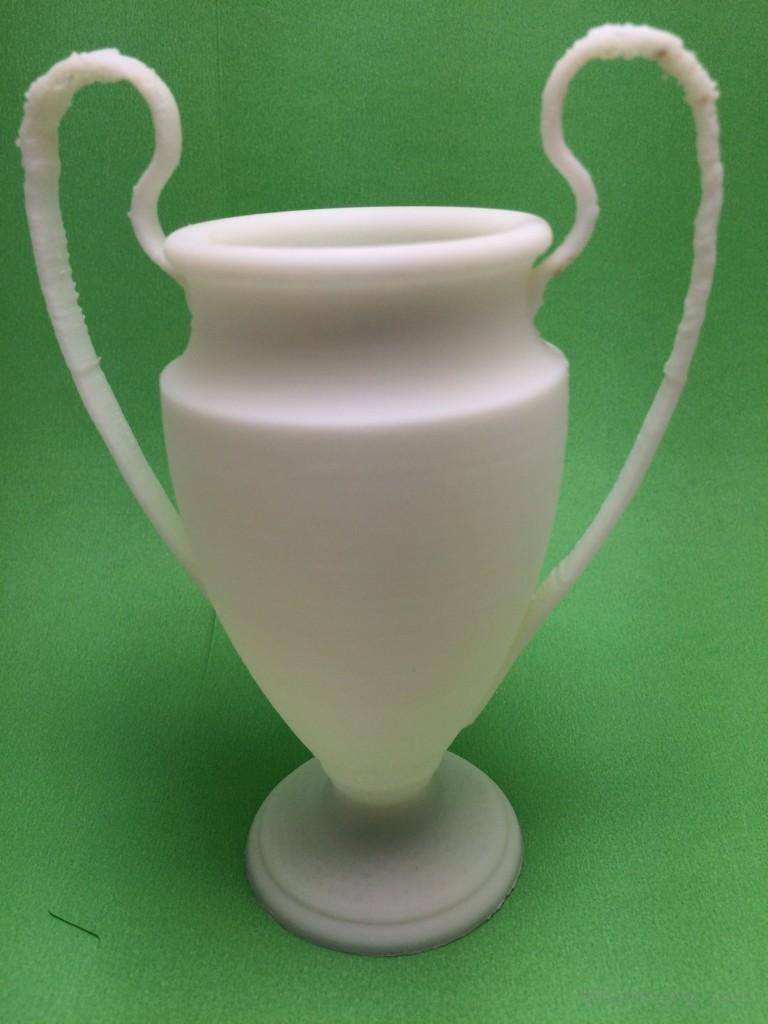 This piece is hollow and about 15cm tall. When we tried printing this in ABS, we had horizontal cracks that were so big, they were almost breaking the model in half. With HIPS, we did not have any cracking whatsoever, it appears to not shrink much at all. This is a clear win of HIPS over ABS. In another print, we saw some light corner lifting with HIPS but that was likely due to poor bed levelling.

One of the things that immediately stood out is the whiteness of the HIPS filament. It is a much brighter white than we have seen in ABS or PLA. This makes it perfect for printing… snowmen. Or in this case: Deranged Mutant Killer Monster Snow Goons. 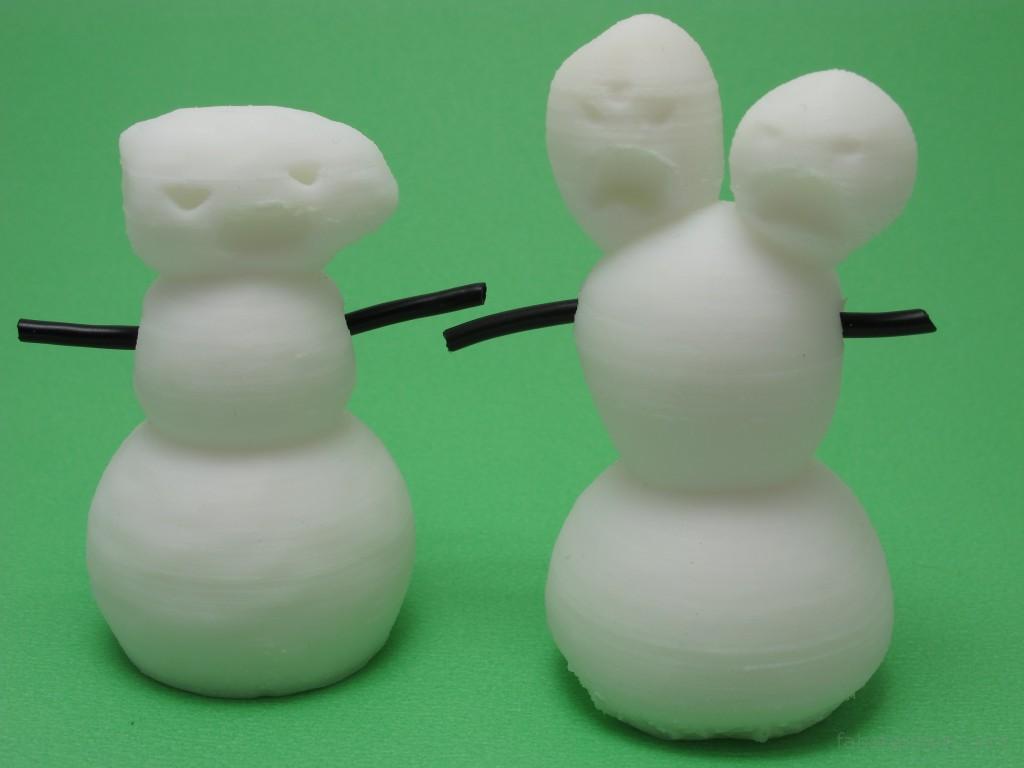 These were printed with an extruder temperature of 235ºC. The ‘lumpiness’ in the snow men is part of the model. The layer height is 0.1mm and we used a 0.35mm nozzle. As can be seen in the picture, the print layers can barely be seen, this filament flows and bonds very nicely. The prints feel quite smooth to the touch, more so than with PLA or ABS.

HIPS prints are much lighter than the same object in PLA (about ⅔ of the weight). Although we didn’t do any testing, the prints seem mechanically similar to ABS: more flexible and less rigid/brittle than PLA.

One of the properties that makes ABS our favorite over PLA is the possibility to use acetone vapor to smooth and strengthen the object. We have done this a number of times in the past; all of our printers’ ABS parts are smoothed and they are much more durable than untreated ones.

HIPS is dissolvable in d-limonene but since it is ‘related‘ to ABS we thought that perhaps we could acetone-vapor smooth HIPS as well. So we tried it on the cute octopus and here is the result:

As it turns out, HIPS can be acetone-smoothed like ABS! The piece does not only look better but it is a lot stronger as well because the printing layers have fused together. We were very happy with this result because (combined with the much lower shrinkage) it means that ABS just got a serious competitor for use as a material for 3d-printed mechanical parts. 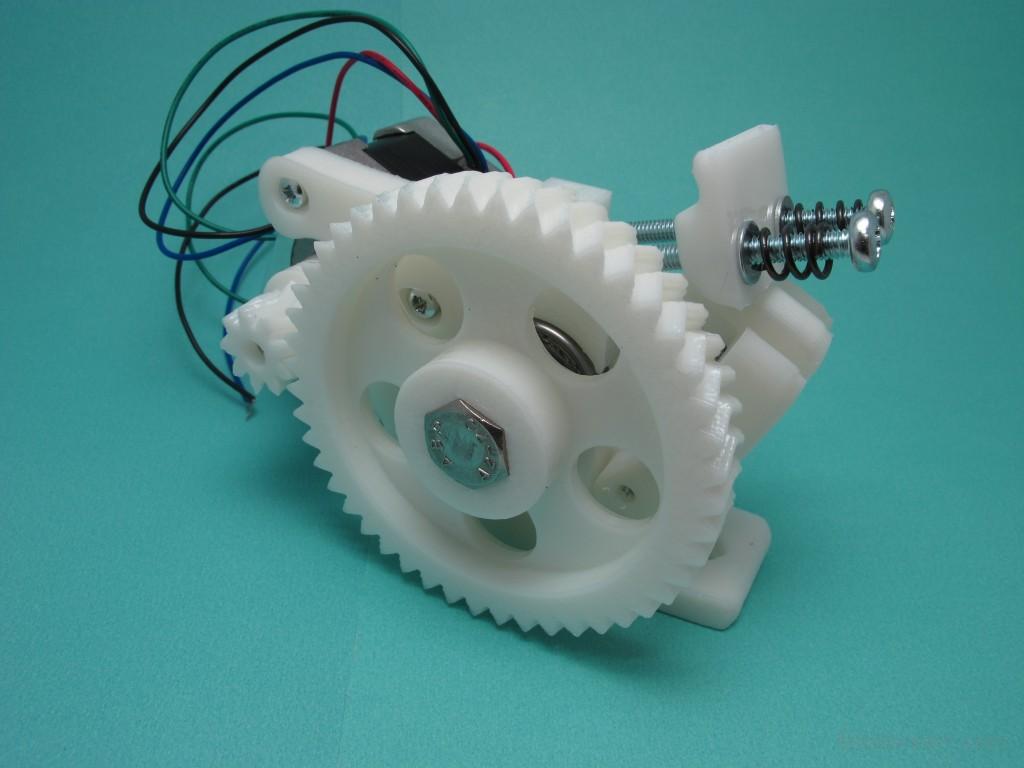 This means of course extruders, specifically extruder gears. This is a Jonas Kuehling Greg’s Wade extruder printed entirely in HIPS. We haven’t put it to the test yet, more about that later…